That might explain the empathy and communication evident from their shared phrasing. Fernández marries classical touch with extremes of noise generation and everything between. On «Forged Expectations» he wields wood blocks on the interior of his concert grand to produce a shimmer from the abraded strings. However, the pair work from a melodic palette so no matter how far out they venture, a return to sonically sunnier climes is always in the cards. That’s aided by an almost impetuous spontaneity, which means that moods change quickly, as they don’t dig in fo prolonged investigation but are always on the way to the next new thing. It’s obvious even within a single improvisation. Witness the title track, which begins with barely audible key strokes and breathy bass clarinet, but rapidly metamorphoses into a circular-breathed upper register tirade tellingly contrasted by subterranean rumbling, before finishing with folksy formulations and lyrical music box droplets. Colonna also deploys baritone saxophone, achieving vocal inflections as well as juddering overtones. On «From Siren to Whispers» he even blows both horns simultaneously as Fernández pins the sustain pedal to the floor.» 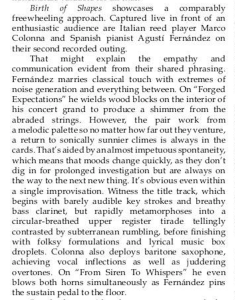